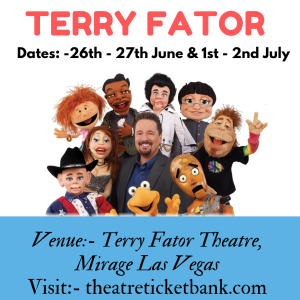 Are you eager to see a comedy show on the stage this weekend but feeling a little tired of stand-up comedy?
or
Expecting something different from performer ?.

If so, this is surely a great show for you all.

Terry Fator is a singer, ventriloquist, impressionist and comedian.
He performs hilarious shows with his dummies at Terry Fator Theatre – Mirage Las Vegas, NV. This popular ventriloquist (a person who himself speaks but seems to the entertainer that voice appears to come from a dummy of a person or animal), perform very well.
His act of entertaining crowd is very different & very successful.
Terry Fator uses 15 different puppets in his act. These puppets seem to be completely real. Hard to guess whether puppet is speaking or Fator.

America’s Got Talent is one of the biggest talent show in the town. Terry Fator not only participated but also won the show. His talent is highly appreciated by the audience all over the world. This unique way of entertaining the crowd attracts more & more audience towards him at the Terry Fator Theatre at The Mirage.

Nevada!! was the hilarious & most popular puppet performed till date. That performance brings waves in the comedy world.

When you are hanging out in Las Vegas, NV enjoying the Sin City, surely there will not be a better option than enjoying watching Terry Fator performing with his puppets. This laughter show will make your evening enjoyable. Don’t miss this amazing chance to laugh out loud with his singing & comedy.

View our available selection of Terry Fator tickets on “concertbank.com”. Determine when you’d like to see this in-demand show. Don’t waste time in thinking be fast to grab the best seats for yourself.